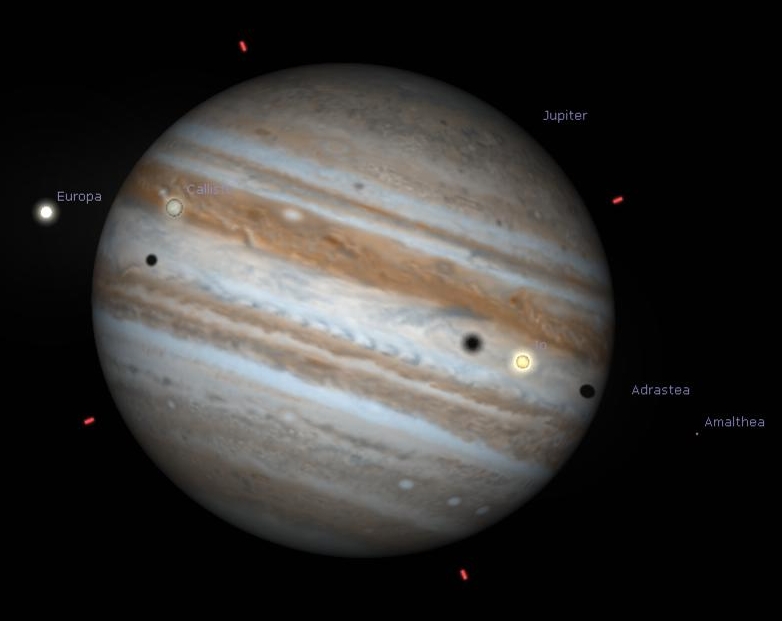 The Night Sky in April

The Planets:
Venus is now descending into the eastern morning sky and by months end will be lost in the glare of the Sun, where it will remain until July. Not before having a close encounter with the moon on the morning of the 6th, just a few finger widths (2 deg) away.
Mars begins the month rising in the mid evening sky around 9pm and by 7pm at months end. It has a close encounter with its old stellar rival Antares (Heart of the scorpion) on the 25th where it is joined by the waning moon with Saturn close by. Now is the time to watch Mars at it approaches opposition next month … stay tuned !
Jupiter, now past opposition continues to be a fine sight in Leo through a telescope. With its short rotational period of just 9.9 hours and the constant dance of its moons you could watch it all night and see the entire planet ! It will be close (2deg) from the moon on the 18th, very fine in a wide field scope.
Saturn continues to brighten and grow in size, and as always is the show pony of the solar system. Encountering the moon on the evening 26th.
Uranus is steadily being lost to the morning glare.
Neptune in Aquarius is visible from 3am and has an apparent close encounter with the Main belt asteroid 11 Parthenope on the 28th & 29th at just 0.5 Deg separation but you will need a good scope to see Neptune.
The Jovian Moons:
Jupiters moons Ganymede, Io, Europa & Callisto have their most interesting encounters with Jupiter on the 3rd, 12th, 19th, 21st & 29th of April. For more detail come and check out the “Astronomers Bible” Astronomy 2016 or at NightSkySecrets store at The Pier with just a few copies left in stock !
The Deep Sky:
The Constellations Leo & Cancer are well placed high in the sky & the showpiece constellations Carina and Crux in the southern sky in April mid evening. You can find such delights as the Beehive Cluster  in Cancer, the Leo Galaxy triplet, The Jewel box in Crux & The Eta Carina Nebula in Carina.
Observing Equipment Advice:
Naked Eye Viewing: This is the best way to see Meteor Showers, the board sweep of the Milky Way & track satellites across the night sky. Choose as dark site and a comfortable reclining position. This is FREE and just takes a bit of effort 🙂
Big Star clusters: we are talking about groupings of stars that are beyond a fuzzy blob, these are things like the clouds of Magellan, the Pleiades & a few selected nebulous regions. These are best seen with a pair of 7x to 10x Magnification binoculars with a 50mm lens. Prices start from around $100.
Fuzzy Blobs: You can’t make out what they are but you think they might be interesting ? These are best seen with a wide field telescope, starting price is $240. These scopes gives you a nice contrast against the blackness of space.
The Invisible: Galaxies, faint nebula & planetary details, this is where scopes 6” in aperture and  above come into play, these start at around $400 and how big you go is only limited by portability and budget (The biggest have 48” or 1.2m mirrors !)
Next Month …..