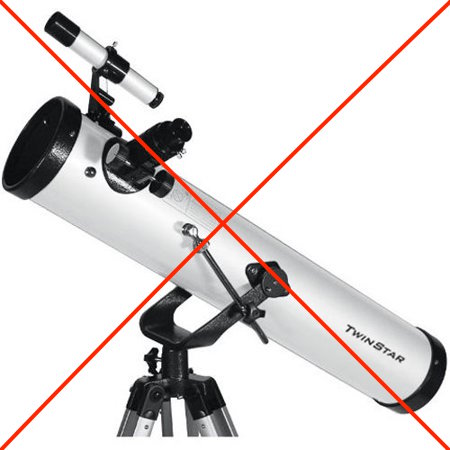 Perhaps you have been thinking for a long time that you really want a telescope but don’t quite know where to start. Maybe you have had a look at some telescopes but the choice is a bit overwhelming, just how do you choose what will work for you ? After 20 plus years of using, selling & repairing telescopes I have these Top 10 Tips that might just narrow it down for you.

The refractor is the most recognisable design with a lens at one end and eyepiece at the other. The Standard type is an Acromatic* Design and is affordable, great for terrestrial use and for casual viewing of the night sky, but suffers from some false colour on bright objects. An Aprochromatic*  design eliminates this issue but is 4 to 5 times the cost. Focal length is relatively short thus giving a more “wide Field” view and a Maximum Aperture of 5″ (120mm) Both are very portable and do not require a large and heavy mount* or Tripod. This makes them quite portable and a popular choice to travel with, if you can afford the quality Aprochromatic scopes.

The reflector gives you the most bang for your buck, allowing a bigger aperture at a reasonable cost and fits into the “Aperture Rules” category (see below). It is generally mounted on a dobsonian (Fig3) mount, further reducing the cost compared to a tripod mounted scope. For example a 10″ aperture dobsonian (Dob) reflector will be lower cost than a quality 4″ ED Refractor. A typical dob will have double or triple the focal length of a refractor and thus greater magnification. The aperture in a commercially made Dob can be as large as 20″ (500mm). They would be best classified as “Semi Portable” except for the 3″ to 6″ sizes.

The Compound scope is usually of a “Maksutov” or “Schmidt Cassegrain” design (Fig 1.). These combine the best of the refractor and the  reflector and are usually mounted on a Go-To* mount. Size can be from 3″ up to 14″. However scopes above 8″ can become heavy to lift. A 3″ Go-to Compound scope starts at around $550 rising to over $14,000 for a 14″ model.